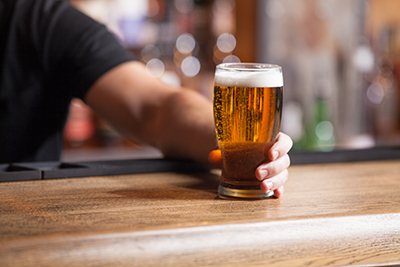 Young people in any country will indulge in inebriating activities excessively and recklessly by whatever means is available to them: negotiating laws with devious enthusiasm, aging fake IDs in the toaster or mastering the art of cut-and-paste forgery. However, Europe and the US tackle underage and binge drinking completely differently – and with fairly different results.

But while Dartmouth College is proposing a ban on hard alcohol in an effort to mitigate the worst effects of binge drinking to little applause, accepting their solution or blindly dismissing the severe problems currently faced by American campuses by suggesting simply that “all college kids drink!” is to deny the deeper cultural issues at play.

When I was a 13-year-old living in Britain’s West Country, my friends and I would raid our parents’ booze cabinets, replacing an inch of vodka with water or pilfering a dusty bottle of peach Schnapps. We would combine our spoils into one vessel, and unceremoniously down it amidst the damp shrubbery of a local park, where we would then – in all probability – be sick. I’m not proud of this, but I’m pretty sure it’s normal because, when I went to visit my father in California over summer holidays, I would do almost exactly the same thing, except it would happen in a shopping mall or a parked car. There was generally less alcohol involved, but, at least for a large number of teenagers, they would throw some prescription drugs from the family doctor into the heady mix to compensate.

For me, growing up straddling the two worlds between parental visits, the real difference between American and British drinking cultures emerged around age 16: in the UK I started going to pubs, having a pint amongst adults with their relatively normal drinking habits. In America, however, my peer group continued their car parking lot antics with little influence from adults.

At college age, this experience gap widened further. As an 18-year-old at a British university, I latched onto the most normal-looking cohort available and made a beeline for the pub. Three years of heavy drinking ensued, but the majority of it was done in bars or clubs where there was a degree of interaction with a more mature drinking culture. If you don’t want to get swiftly booted out, you need to subscribe to the accepted rules of civilisation.

On American campuses, however, drinking occurs in surreal social isolation. When the National Minimum Drinking Age Act increased the drinking age to 21 in 1984, it effectively relocated boozing from the public spaces of bars into private homes, where a world of pre-gaming, hazing, keg parties and pledging (ranging from the bizarre and sadistic to the downright criminal) became normal. The Greek system of self-policing creates a world akin to Lord of the Flies – the post-watershed version, in which a Bacardi plane crashes alongside the children.

Take the Fraternal Information and Programming Group-approved Bring Your Own policies for house parties (as outlined brilliantly by Caitlin Flanagan in The Atlantic); they describe Kafka-esque levels of bureaucracy required for boozing, but ultimately result in the only system in America whereby selling alcohol can be monitored and managed by those legally too young to partake. The British look upon the rituals, rites and Masonic jargon of the Greek college system with the same utter bafflement that Americans might look upon Morris Dancers; the key difference is that when Morris dancers get out of hand, people don’t wind up the victims of abuse and torture.

But regardless of the differences in law and in practice, both Americans and British are among the worst binge-drinkers in the developed world – and the problems associated with this are manifold. While the laws policing drinking in the US are certainly more puritanical, the higher minimum-drinking age is correlated with fewer alcohol-related deaths than before it was implemented. The higher drinking age has done little, however, to address the endemic culture of excessive drinking (and the violent behaviour associated with excessive drinking). In America, a study by researchers at Washington University School of Medicine revealed that binge-drinking rates fell by 30% among 18- to 20-year-old men who didn’t attend college, strongly indicating that campus culture perpetuates this behaviour.

People often cite the liberal laws of Italy and France as an example of how to raise children into healthy adult drinkers who enjoy an aperitif or two rather than rounds of power hour or vodka eyeballing. Southern Europeans drink more often but at less volume, with a far lower rate of binge drinking. In France, “le binge drinking” only officially entered the lexicon as beuverie express in 2013.

But while introducing alcohol to children at a younger age in moderation works on the continent, neither America nor Britain share their long history of cultured and civilised drinking. We drink to get drunk, and we glorify our past drunken misdemeanours like the trophy skins of a hunter. Certainly, regulators can look to southern Europe for inspiration, but mimicking their legal system isn’t going to fix the problem at this point – the difference is cultural, not merely legal.

There is no immediate solution. Binge drinking has become normalised to such a degree that college kids are expected to get wasted and break themselves – whole movies are made about it – and yet, it has gone so far beyond society’s control we don’t know how to turn back the clock. Is further legislation likely to address the problem in any meaningful way? Surely the farce of prohibition, the collective indulgence from 1919 to 1933 which was futility at great expense to both life and the nation’s purse, should have taught America something about humanity’s will to inebriate itself.

Banning hard liquor on campus may only exacerbate the rituals of secrecy and obscurity surrounding college-age drinking in America and insulate these pockets of violent amorality from public censure or control. Imposing such a measure only creates the illusion of tackling a problem far greater and more deeply ingrained than a simple ban can address. Certainly if they were to try this in a British university, the classrooms would quickly grow empty, and the kids would remain just as filthy drunk.